How did the idea to open the world's first renewable power station and contemporary art centre evolve?

Pablo Wendel and I set up E-WERK Luckenwalde in 2019 with the vision to take action against the climate emergency and pioneer new economic and ecological examples for the cultural industry.

It’s a dream that began ten years ago when Pablo, a conceptual performance-based artist, established Performance Electrics gGmbH as a non-profit electricity provider to generate and transmit what he called Kunststrom. Kunststrom translates as ‘Art Power,’ and is an original form of electricity generated using renewable technologies.

For Pablo, it began as a way to survive financially, but he quickly saw it as part of a drive towards autonomy. He realised that as an artist he was subservient to both the commercial market and the cultural trends of institutions and he began to think: what if it were possible to create my own rules, my own autonomy, my own sustainability?

This idea led Pablo into action, and in 2017 he transformed a former fossil fuel power station— the 1913 brown coal power station in Luckenwalde—into the renewable Kunststrom Kraftwerk. I came to visit, fell in love with the project, quit my job and moved to Luckenwalde to establish the space as a contemporary art centre powered by its own production. We launched in 2019 with POWER NIGHT, curated by Block Universe (co-curators: Louise O'Kelly and Katharina Worf), and exhibitions by Nicolas Deshayes, Lucy Joyce and umschichten.

We now have 35 Performance Electrics clients throughout Germany, whose offices, museums, and houses are powered by Kunststrom. As a not-for-profit company, all profits go directly into supporting the development of Kunststrom technology and the contemporary art programme. This means our clients are directly supporting culture by paying their utility bill. As such we see E-WERK Luckenwalde simultaneously as a Kunststrom Power Station, contemporary art centre, and functioning art work.

Could you tell us more about the renewable energy you produce on site?

The resurrection of the power station was painstaking, but Pablo did it by working with many of the men who used to work there. As a listed building we were not
allowed to install solar panels on the roof, but this was no bad thing, because sun and wind are weather dependent and therefore not reliable as energy sources all year round. Instead, the main source of renewable energy we produce is created via a wood-gas pyrolysis system in collaboration with Spanner Re2. It’s a 100% C02 neutral process, as well as being a solution that is sympathetic to the history and mechanical infrastructure of the building.

Where does the wood come from?

That was an important question. Could we get wood-chips produced locally and sustainably? E-WERK is surrounded by natural forests, which immediately opened up the possibility to work with local wood. After researching the area, Pablo discovered that much of the forest area was struggling due to monoculture, climate change and bad forestry, resulting in significant parts of forest being cleared and instantly replanted in order to save the forest as a whole. This meant Performance Electrics could use wood which was being cleared anyway; in essence a waste product. To fully close the circuit, Performance Electrics transports the wood chip ashes back to the forest, so that any naturally occurring minerals are replaced back into the forest’s cycle. 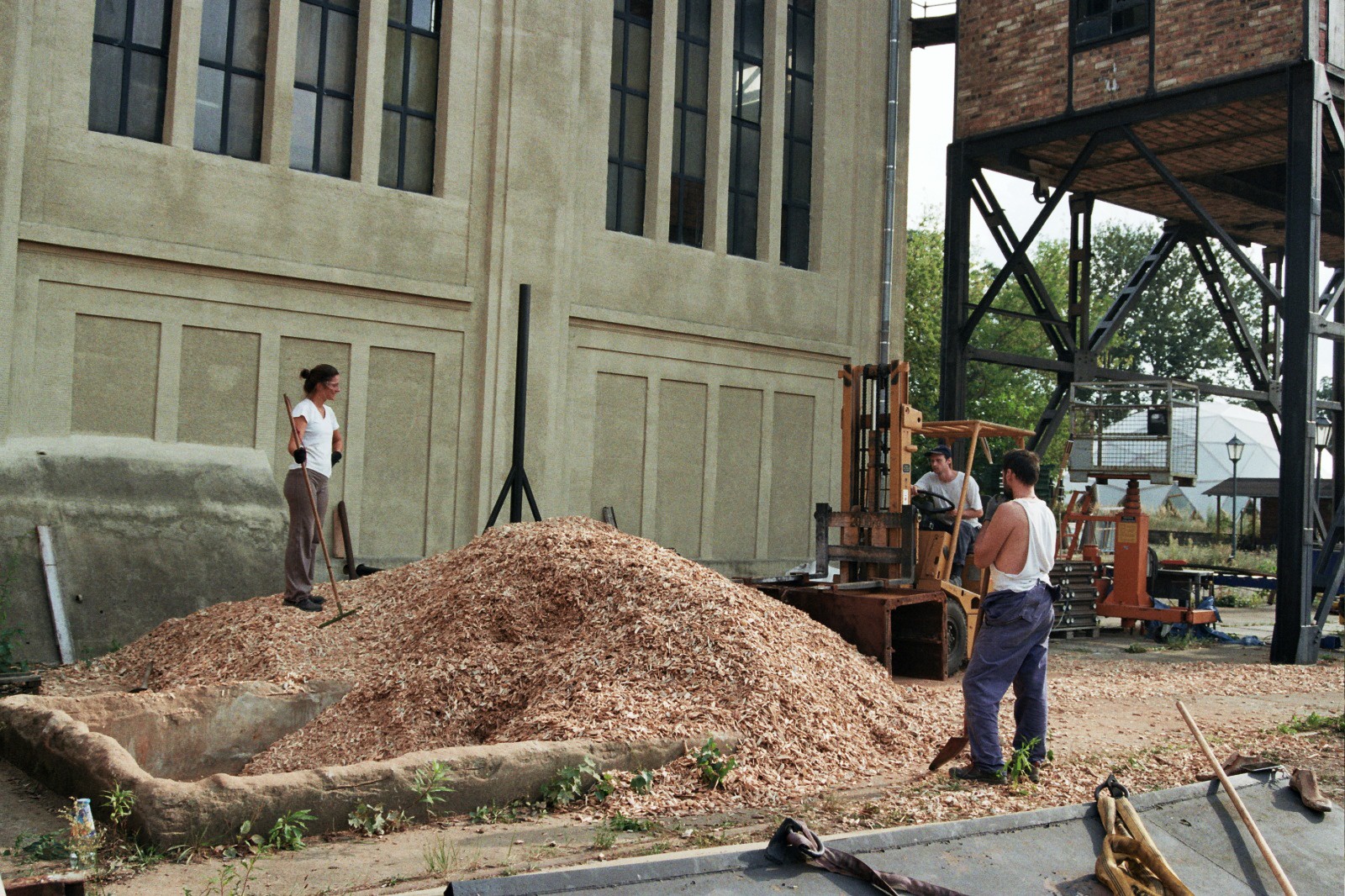 What caused the shift in considering climate within your own curatorial practice?

Guilt, most probably! I have always been a strong believer that art can and should have a socio-political impact and have always been attracted to artists and art works that tend to have an activist streak, serve a purpose and thus a public. I was becoming increasingly infuriated with the proliferation of gestures in the art

world against climate change and ecological justice. There was a lot of talk about how bad climate change is and yet such a lack of responsibility. It was almost as if people, myself included, felt alienated from their own actions and power. Working in the arts I often felt helpless in the face of effecting real change, but as always, it was artists courage and resilience to failure that inspired me to start doing something positive.

I’m also extremely lucky to be surrounded by inspiring people, one of whom is Lucia Pietroiusti, General Ecology Curator at Serpentine Galleries, who will guest curate POWER NIGHT this year, around the notions of eco-mysticism. Lucia also helped me understand the symbiosis of ecology and motherhood, which as a new mother, I couldn’t agree with more. As Lucia puts it: “when you have children, you start to feel accountable for time in the future beyond your own life. And even that tiny change in perspective allows you to find accountability or responsibility over longer periods of
time.”

Do you think it is possible for the sector to continue to remain ambitious and international in outlook and at the same time reduce climate damaging behaviours?

Absolutely. But I think what it means to be ambitious needs reconsidering. The pre-pandemic pace of our sector was astonishing. I understand this is a complicated ecosystem and livelihoods depend on a certain pace, but there must be an alternative that is both kinder to the planet and mind.

I strongly believe governments need to step in to reward cultural institutions, galleries, initiatives etc. for contributing to the new green economy. As everyone at GCC is aware, the cultural industry has an enormous carbon footprint and if there were significant incentives for the sector to create more resilient, ecological and economic models I am sure we could pioneer alternative structures for our sector. If they reward conglomerates, why aren’t they also rewarding culture?

As a highly interdependent ecosystem, the government needs our support to reach their carbon neutral goal of 2050. At E-WERK I am determined to be ecological, ambitious and international. I feel particularly devoted to this in light of Brexit, borders closing and customs difficulties etc. I refuse to become insular and downgrade ambitions. I think it can be exciting to work within boundaries. For instance, last year we opened TRAFO, our low carbon kitchen in the building's former transformation centre. Low carbon cooking is a challenge, but the artists we invited, including Luiza de Prado O Martins, Studio Olafur Eliasson Kitchen and Elisa Mozer really embraced the limitations and devised an incredible workshop programme, curated by Katherine Thomson.

International collaboration and collective action is central to GCC’s strategy for decarbonising the art sector. E-WERK has a similar stance on collaboration and recently announced its partnership with Berliner Festspiele and Gropius Bau in an effort to substantially reduce both institutions' 2021 programme carbon footprint. Can you tell us about how this collaboration occurred and the impact it is expected to have?

Collaboration is one of the key pillars to our mission here at E-WERK. I met with Berliner Festspiele over a year ago when we were planning to show ‘Sun & Sea’ in September 2020, to see if there were possible ways to collaborate. It wasn’t easy, logistically, at first, but it made so much sense to work together both economically and ecologically. So now the plan is to combine resources such as the sand, share knowledge of the production logistics, split transport and transportation costs and work together in terms of press and communications. Both institutions have something completely unique to offer, with different audiences so the benefits are not just practical: they are so far reaching.

In 2019 E-WERK released its pioneering ecology statement, with one of the key elements being a focus on ‘progressive deceleration’. How is this idea realised within your exhibition spaces?

The concept of progressive deceleration is to create sustainability, both ecologically and psychologically. I want E-WERK to be around in ten years, and I’m committed to finding a curatorial model that is sustainable ecologically and existentially. Since 2019, we’ve had longer consignment agreements and permanent installations, such as FLUXDOME by umschichten, our 18m diameter geodesic dome, which we now use for our public programme.

This year we also wanted to experiment with inter-seasonal exhibition collaborations, rather than quick successive programming. For instance we have invited Peles Empire to respond to EW's historic flagpoles with the Flagpole commission, which will remain in situ until December 2021. This will then be layered with the programme ‘The Archive Show’ featuring Lamin Fofana, Henrike Naumann, Jenna Sutela, Keiken, L. Zylberberg and Lauryn Youden, which will be presented alongside Sun & Sea this summer. The idea was to host longer exhibition periods and allow different conversations to feed into one another from different programmes that all fed into the central theme of grey energy, which is the hidden energy associated with production. It is an experiment, but I like this idea of building up a rich tapestry of complementary and opposing curatorial frameworks for our audiences to dive into. This also gave our artists a more nurtured opportunity to host their works in our spaces for longer periods of time, and allow greater audiences to see it.

I am also interested in the idea of non-fixed programming. For instance not committing to a quarterly programme, but saying there will be quiet moments and busy moments, but we will not be subservient to the beat of the industry - we will run at our pace with the intention to create sustainable programming structures.

Co-Artistic Directors, Helen Turner and Pablo Wendel with their dog Coal in the Bauhaus Stadtbad, 2019 © Lukas Korschan for The FACE

What advice can you give to galleries, organisations and institutions who are aware of and concerned by the issues we face, but perhaps don’t know where to start?

Take the risk! Even if you’re not going to be 100% green or do everything flawlessly, doing something is better than remaining passive. We’re always learning here and we have a million questions about how to be more sustainable, but we’re trying and for us that has resulted in taking direct action.

This site uses cookies to help make it more useful to you. Find out more about cookies.